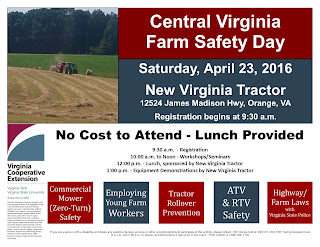 Mark your calendars! There will be a regional Farm Safety Day on Saturday, April 23, at New Virginia Tractor in Orange.

Very fitting for this time of year will be a session on zero-turn mower safety and ATV/RTV safety. Make sure you're navigating your yard and fields with the safest behaviors possible.

Also included will be a tractor rollover prevention seminar, plus a station with representatives of the Motor Carrier division to discuss highway laws and how they pertain to farm vehicles and equipment. Have questions? Get answers from the experts!

Finally, if you employ young farm workers up to age 24, learn how their needs differ from other employees. Safety responsibilities ultimately fall to the farm owner/employer, so attendance at this session will help you think about potential risks that currently exist to your young employees.

Lunch is being provided by New Virginia Tractor, and they will have new product demonstrations as part of their open house event.

Pre-registration is not required. We do hope to see you on April 23rd!

Virginia State University Campus & Randolph Farm
INCLUDES:
Classroom Learning | Field and Lab Activities | Stay on Campus | All Meals Provided
Gain hands-on experience with the world around you through VSU’s Summer Enrichment Program in Plant, Soil & Environmental Science. During the week-long program, participants will learn from experts through experiential learning activities about:
• Water and environmental issues
• Food and ornamental crop production
• Aquatic plants and animals
• Soil composition, soil health, and soil management practices
• Resumé building & interviewing skills
• Career opportunities with the USDA and other federal, state, private industry jobs
Application Requirements: Admission is restricted to rising high school juniors and seniors interested in the plant, soil & environmental science disciplines. Applicants are required to complete and submit this online application, including a one-page essay (200-300 words) describing career goals and reasons for interest in the summer enrichment program.
Applications are due by MAY 6, 2016. Applicants who are admitted will be notified no later than June 1.
This program is funded by USDA NIFA Award No. 2012-38821-20041, Increasing Undergraduate Enrollment in the Department of Agriculture at Virginia State University.
APPLY AT: http://goo.gl/forms/Xc8GWKpSaI

On Friday, the youth completed the Stockman's contest, which involved a quiz, identification of ten each of livestock breeds, equipment, feeds, and retail cuts of meat. It also included judging hay, meats, beef cattle, sheep, and hogs.

On Saturday, Orange youth competed in the livestock judging contest where they evaluated live classes of animals and some youth gave oral reasons.

In the junior reasons division of 76 contestants, Abbie Gill was 14th in cattle, 24th in sheep, and placed 21st overall. Brice Norford was 9th in swine, 17th in reasons, and 16th overall.  Gini Bryington placed 7th in sheep, 17th in questions, and 22nd in reasons.

The team of Abbie, Gini, Brice, and Sadie Wentz placed 7th in cattle, 6th in swine, 5th in sheep, 6th in reasons, 6th in questions, and 6th overall (only one point behind the fifth place team). There were 14 teams in the division.

The senior team of Garrett Hopkins, Roxanne Akers, and Skylar Hitt placed 6th in cattle, 2nd in swine, 21st in sheep, 14th in questions, and 6th overall out of 41 teams.

Congratulations to all of our contestants! You did a great job with minimal coaching and preparation for this contest.

Directions - Take I-95 to Exit 92 Hanover.  That will put you on Route 54 East. Continue approximately 1.7 miles and Turn right onto Taylor Complex Lane. The office is in the same Building as Hanover Parks and Recreation, our entrance is the furthest on the Left.

You should attend this great event if you . . .

Want to pick up some general knowledge and care about . . .

Want to learn how to start showing . . .

how to for each species

what do you need

The above sessions will be led by club members who have several years' experience in showing these animals - they show at county fairs throughout the state, breed shows, and the State Fair of VA and have lots of knowledge!

Parents there will be session for you as well . . .

Your involvement in showing

How to support your youth

Parents- your session will be led by club leaders who have children involved in showing for several years!

Lunch will be provided (pizza, lemonade/water, dessert) - just bring your own chair!

No fee to attend this event, just bring bag or canned dog food donation - we are collecting dog food to support BARK in Hanover County as our spring community service project.

If you're planning to compete in 4-H County Contests Thursday night and haven't signed up, please do so at https://goo.gl/0zFGsy.

Congratulations to the members of our Orange 4-H Bit N' Bridle Club. They competed in the Northern District 4-H Horse Contests this weekend and performed very well.

These youth will now advance to the EquiSmartz state 4-H horse competitions in Doswell in April. Way to go! 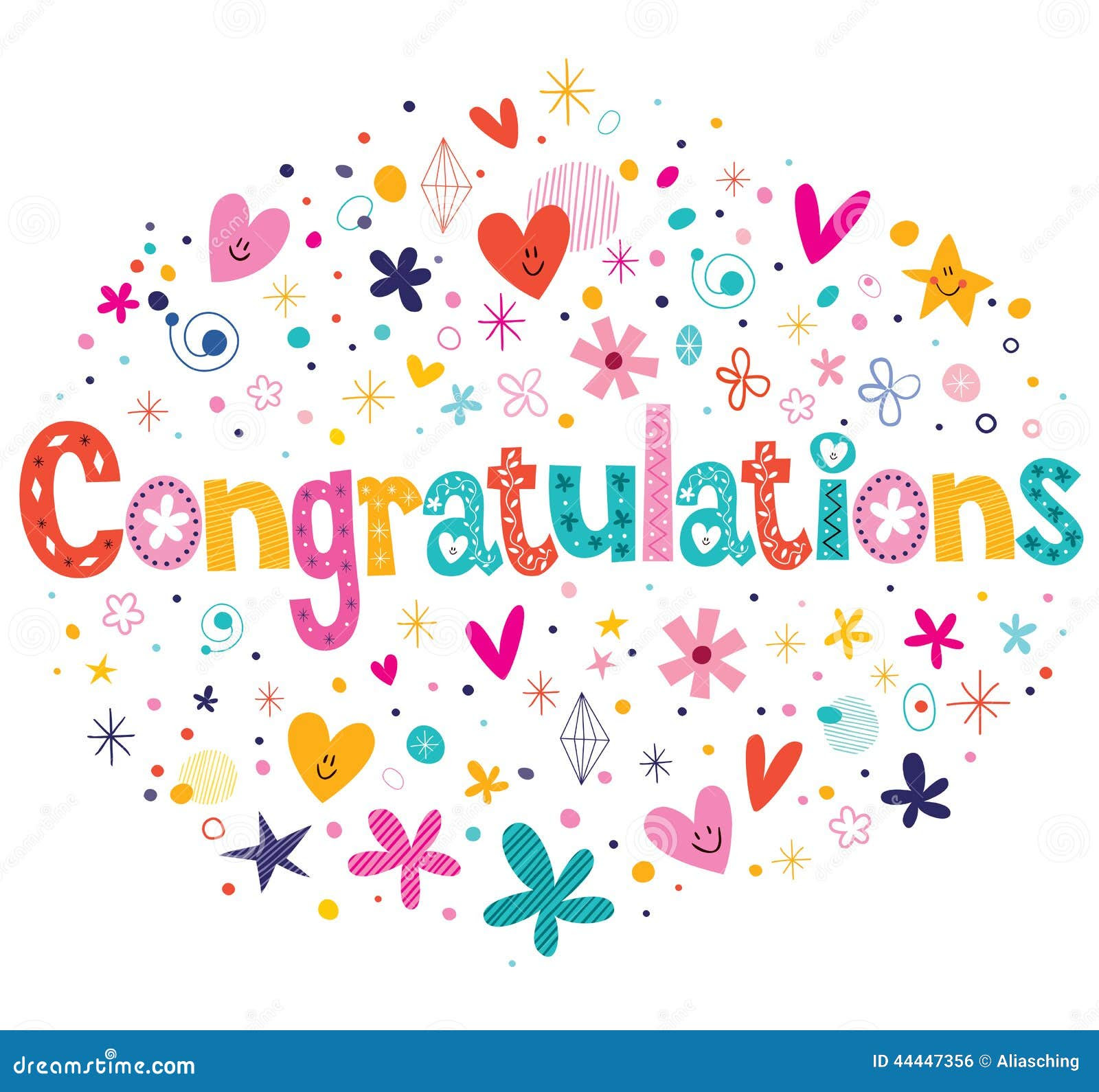 We won't accept any packets until sign-up day on Wednesday, March 30, from 4:30-7:00 p.m., but fill out these things now and you'll be that much faster on registration day. The registration packet and a $75 deposit are all that's required to hold your spot on March 30.

In 2016, the Junior Beef Roundup, held in conjunction with the Virginia Beef Expo, will be featuring two new contests.

The first contest will be a state 4-H tractor driving contest to be held in conjunction with the State FFA Tractor Driving contest on Friday, April 15th at 2:30 PM. The State Tractor Driving Contest provides 4-H members the opportunity to demonstrate their knowledge of tractor maintenance, safety, and skill in operation. The contest consists of the following events: written examination; parts identification; operating a tractor with a two-wheel implement attached; and operating a tractor with a four-wheel implement attached.

Since both contests are inaugural events, both contests are limited to the number of entries. The rules and contest information will be posted to the Junior Beef Roundup page on the Youth Livestock web site at: http://www.ext.vt.edu/topics/4h-youth/youth-livestock/shows/beef-expo/index.html . Please get your entries in early to be eligible to compete.

Also, just as a reminder, entries are due next Tuesday, March 15th for both the Junior Beef Roundup Youth Beef Shows and the Youth Cattle Working Contests. Please get those entries in as soon as you can.

Don't forget! If you're planning to show at the Junior Beef Roundup in Harrisonburg in April, entries are due next Tuesday, March 15!!!

Livestock Club members: Due to the Pennyslvania trip, district cattle working contest, and spring break all falling in the first week of April, your club meeting is being moved a week later. Please mark your calendar for Wednesday, April 13.

We are proud of two Orange 4-H youth who are the inaugural contestants in the new 4-H Table Setting competition. Dorothy Kennon and Hayden Rogers put together great displays and deserve special recognition.

In the table setting event, participants plan a meal (no actual food preparation) and matching decor according to a theme. The meal must include Virginia-grown agricultural products, and each 4-H member prepares a presentation for judges about the foods they chose for their menu card and why. Additionally, linens, tablescapes, place settings, and drinkware should match the theme.

Hayden chose a sportsman's dinner, including wild game on the menu and colors of gold for her theme. She even had bird dog china, borrowed from a family friend, and a statue of a bird dog surrounded by boxwood clippings. 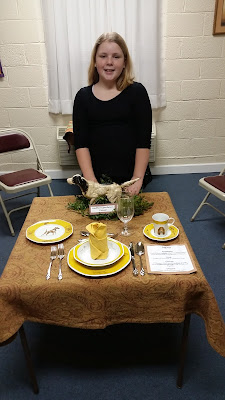 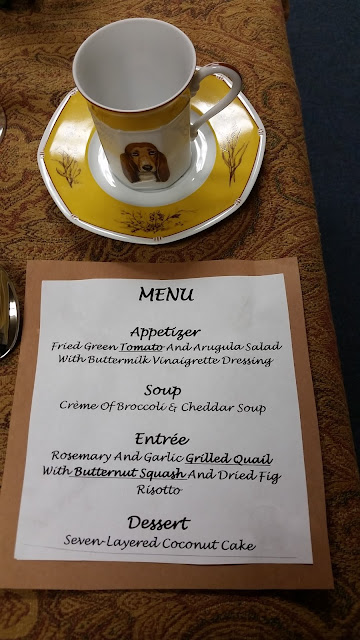 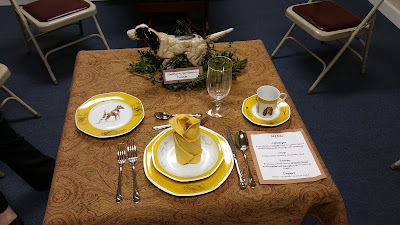 Dorothy creatively imagined her own southern restaurant and went all out for a BBQ dinner made with ALL locally sourced ingredients!!! She even featured pork BBQ made from a 4-H member's project animal. (Can you tell Dorothy has learned about direct marketing?) 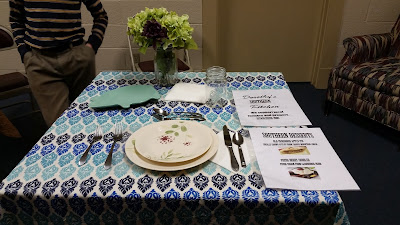 She chose a pleasing color palette of blues and teals, and made menu cards complete with photos of each item she would offer. 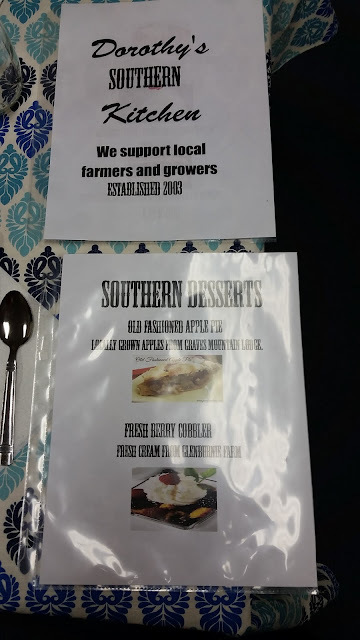 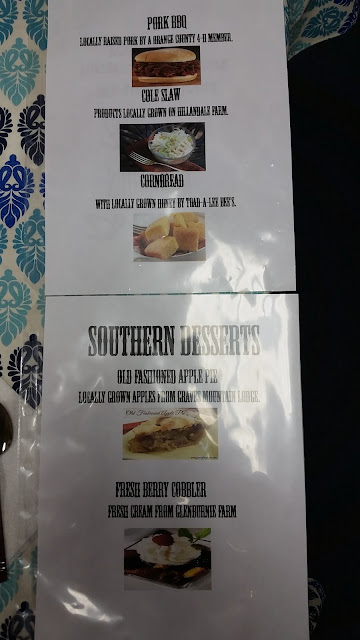 Congratulations to both members for a job well done! It's never easy to be the first at something, but you did it and did it well. Hopefully both ladies will advance to the county contests on March 24 and the district event April 9.

If you are interested in table setting, it's not too late to compete at the county contest. Click on this link for a complete contest description and score card. Contact the Extension office if you have questions.

We are proud to welcome new 4-H Youth Educator Courtney Wesner to our team. Courtney started March 1 and has hit the ground running, attending the Career and Tech Education Task Force with Orange County Public Schools, leading stockman’s practice Wednesday night, and judging 4-H youth presentations.
She was born and raised in Chalmers, Indiana, where she grew up on her family’s Simmental and SimAngus™ cow-calf operation. Courtney is a 2013 graduate of Purdue University where she received a Bachelor of Science in Animal Agribusiness. While at Purdue, she was a member of a successful and nationally competitive livestock judging team.
Courtney is no newcomer to youth development programs, both as a participant and a coordinator, and an active member of 4-H, FFA, and the American Junior Simmental Association (AJSA). She joins us most recently off of a position at the American Simmental Association (ASA) where she spent four years assisting with AJSA Youth Activities programs.


We’re still waiting for Courtney’s email address to get set up, but feel free to call or stop by the Extension office to say hello and welcome her to Orange! 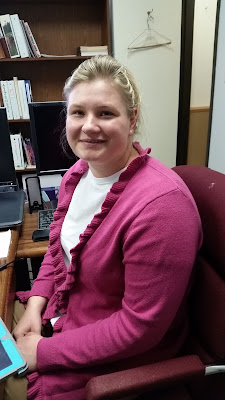 4-H IFYE Delegates Set to Visit Virginia - One from Jamaica, One from Austria - Can You Host?

We are currently looking to place two 4-H IFYE delegates with 4-H families for periods of three weeks this summer. If you choose the first session, they can go to State 4-H Congress with the Orange delegation!

See below for descriptions of the two delegates for summer. There is also a 25 year old man from India who will need host families this fall.

Let us know if your family would like to take advantage of this great opportunity!!!

We have heard great things about this event, so all new and experienced exhibitors are encouraged to attend.