We started our day with a visit to 5 Riders Farm on Twyman's Mill Road near Woodberry Forest. The family raises a variety of vegetables and markets them through an on-farm stand, roadside set-ups in Madison, and weekly deliveries of a CSA to the Town of Orange. 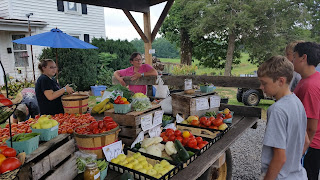 Kendall Rider provided a tour of the farm, including meat rabbits, goats, chickens, ducks, guineas and vegetables, plus they run beef cattle. The ducks pictured were hatched by the family and will begin laying eggs soon. 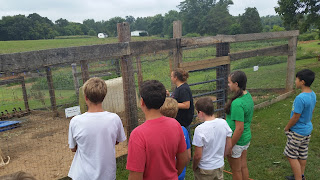 This load of sweet corn was freshly picked and brought to the house while we were visiting. The Riders donated an entire bag to our camp!!! We were surprised and so grateful. In fact, they also donated tomatoes and peppers for our fresh salsa, and a dozen eggs that we used in the meat loaf for lunch. We couldn't have gotten any fresher eggs; they were collected while we waited! 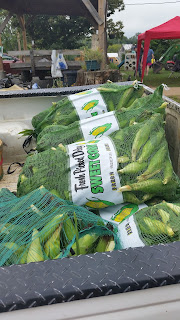 Though they're still picking plenty of summer vegetables, they're also planning for their fall crops and cooler weather. Here Kendall shows us broccoli, cabbage, and lettuce plants, to name a few. 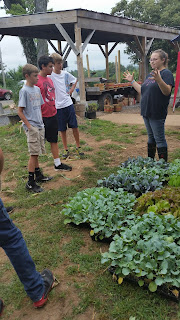 After the farm, we traveled to the Madison Extension Office because they have a large teaching kitchen, and the campers worked on making lunch. Meat loaf was first, so that it could bake while we worked. Mixing was hard work! 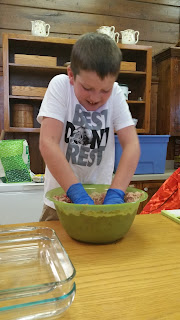 No summer meal would be complete without fresh corn on the cob, so shucking and silking were next on the agenda. 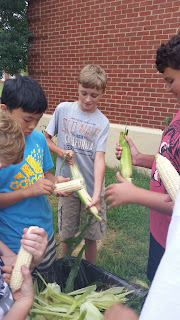 Then the crew returned to make herbed butters to go with the corn. Here, they're chopping the fresh herbs. One group made a horseradish and chive butter, another used oregano for an Italian butter, and the third group used fresh dill. All three were yummy on the hot corn. 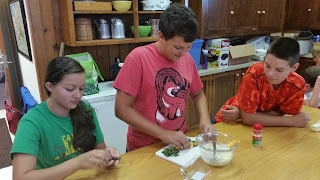 Then it was time for fresh salsas -- one tomato and one peach. Not only did we learn to read recipes, but we had to do math and make sure our fractions were correctly added as we doubled and tripled recipes. Whew! 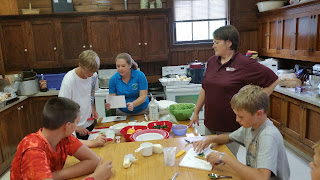 Both recipes used fresh jalapenos, so we discussed the safety concerns of handling hot peppers, removing the membrane and seeds, wearing gloves, washing hands, and not touching our eyes!!! Looks like this happy camper didn't mind his hot job. 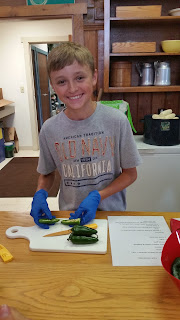 Then it was time to eat!!! The meat loaf was hot out of the oven, the corn and butters were tasty, and the salsas were delicious. To top it off, FCS agent Clare surprised everyone with chocolate squash bread. The campers scarfed it down, realizing only later that it was made with grated yellow squash. Yum! 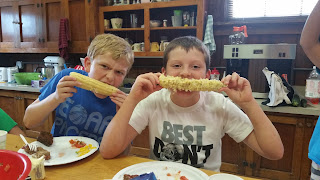 After cleaning up the kitchen, we headed to Mill Valley BBQ to find out how they cook their pork. Owner Rodney Lillard shows the start with boneless Boston pork butts. 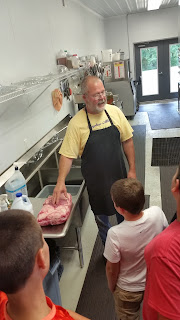 Then we headed outside to the cooker and saw where the magic happens. The campers were very interested in this process and they were able to correctly answer how Mr. Lillard knows when the meat is done -- by using a meat thermometer! 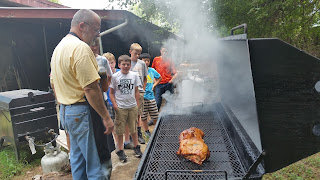 Even though we had just finished lunch, this bunch sure did not turn down the offer of BBQ sandwiches from Mill Valley. Everyone said the BBQ was delicious, but their favorites varied for the three types of sauces offered. 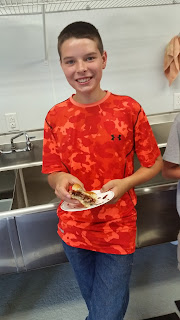 Back at the Extension office, we divided up the extra corn and camp families will have a special treat tonight for dinner. 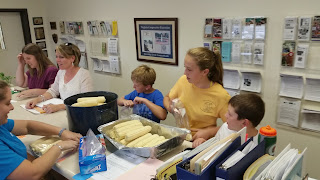 We're having a great time and are so grateful to the local farm businesses and restaurants who have welcomed us thus far!!!