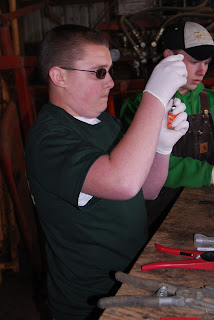 Congratulations to the two Orange County 4-H Cattle Working Teams, which placed first and second in the regional contest held April 11 in Radiant (Madison County).  Team A - Elizabeth Nixon, Garret Chambers, John Michael Knight - handily won the contest with a score of 99 out of 100 possible points.  Team B - Robert Nixon, Zach Swope, Blake Hopkins, alternate Kelly Shifflett - placed second with a score of 94.  Both teams will advance to the state competition being held this coming weekend in Harrisonburg, VA, as part of the Virginia Beef Expo.

The regional contest featured 14 teams from Madison, Orange, Culpeper, Fauquier and Appomattox Counties.  Teams of three youth had to process three head of cattle in a safe, correct and efficient manner.  Processing includes necessary vaccinations, ear tags for identification and fly control, and treatment for parasites.  Safety of the animals and youth is paramount and judges evaluate all parts of the contest, from use of equipment to sanitation and teamwork. 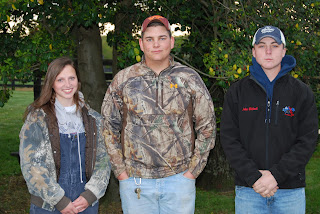 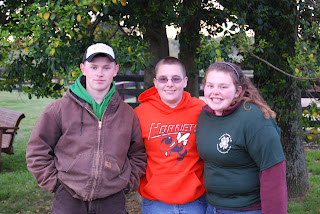