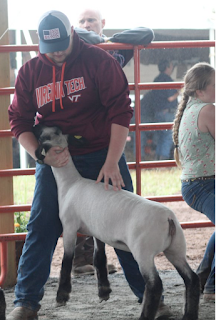 Joseph first moved to Orange County when he was 7 years of age and has since
made a lasting impact on the surrounding community through his volunteer work
and 4H experiences. Having been involved in the 4H Livestock club since he was
just 7, Joseph said the past 11 years of being a 4H member has significantly impacted
his life! Joseph has been a member of  the livestock club for 11 years and the Stockman’s
team for 3 years.  He has also participated in many 4H events such as Stockman’s camp,
the county fair, and 4H day at the capitol!  Joseph has been a 4H exhibitor at the orange
county fair for 11 years, showing hogs all 11 years and lambs for 10 years!
The greatest opportunity that 4H has allowed Joseph to experience was being directly involved
in the community. From volunteering his time to pick up sticks as a child, to spending days on
end to transition an empty field into the lively fairgrounds, Joseph has grown both in his
love for helping others and in his community involvement. The biggest lesson that Joseph
has learned from participating in 4H is preparation! Joseph has been the president of the
livestock club and has had to learn how to pace his planning and perfect his time management
skills by planning meetings each month, projects, and speeches! Joseph also said that 4H has
helped him in the aspect of public speaking!
Joseph's favorite 4H memory is setting up for the fair last year. He enjoys the feeling of being
part of something bigger than himself and watching the fair transform from an empty field to a
thriving county fair. He volunteered his time to build the fair’s show barn and is very proud to
have had a lasting impact on the county fairs to come! When asked how 4H has impacted his
life, Josh said it was a fantastic introduction to agriculture. He said, as a child, he didn't know
much about animals before joining 4H and Stockman's team has taught him about agriculture
and provided him with learning experience around animals and public speaking. “Now I don't
have trouble getting in front of a crowd.” 4H has enabled Joseph to grow in public speaking
and also as a member of his community. Joseph loves how the county interacts with 4H and
how it is an extremely pro 4H environment.
When asked what 4H means to him, Joseph answered “ 4H is a program that binds the
community and the youth. It helps kids grow mentally and mature to become productive adults.
The lessons it teaches are not ones that can be taught in a classroom. For example, managing
finances and the responsibility of taking care of livestock. 4H teaches a lot of skills and is a great
environment to learn and develop.”

We wish Joseph the best in his future endeavors, which include attending Germanna Community
College in the fall and then attending a 4 year university!

We made it to camp!